What is the Jurassic Coast?

The Jurassic Coast is a Walk Through Time

With its rocks and fossils we can uncover detailed stories from Earth’s ancient past. Through its landslides, cliffs and beaches we can learn about the natural processes that formed the coast and continue to shape the world today.

The layers of sedimentary rock along the Jurassic Coast can be read like a book. They reveal the history of Earth across 185 million years and form a near complete record of the Triassic, Jurassic and Cretaceous periods. Exploring this immense story takes us on a walk through time across deserts, tropical seas, ancient forests and lush swamps, recorded in rock and laid out along the 95 mile stretch of coast between Exmouth in East Devon and Studland Bay in Dorset. Discover the Highlights of the Jurassic Coast.
It is a site of outstanding international importance for Earth Science. For this reason the Dorset and East Devon Coast – the Jurassic Coast – was designated as England’s first natural World Heritage Site in 2001. 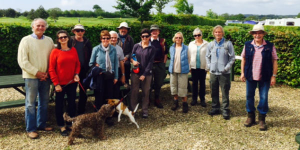 Read why we're setting the standard

Book Now Get in touch